Fred Cooley hit a double to help his short-season team to a win; Played four seasons, made AA

Originally published March 24, 2015
Fred Cooley's team was down by one in the fifth inning of this August 1989 game. When his at bat was over, they had a lead they wouldn't relinquish. They also had a division title. 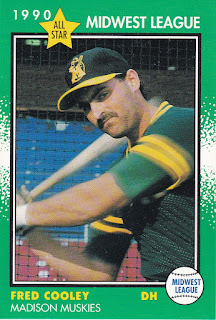