Fili Martinez finished a college shutout; Later hoped to finish by making bigs, never made it

Cal State Northridge's Fili Martinez picked up a loss in his previous outing against the club, but, in this April 1988 contest, Martinez did his best to ensure the win, according to The Los Angeles Times.

He did so by throwing a four-hit shutout, The Times wrote.

"I was getting a little tired in the last inning again today," Martinez told The Times afterward. "But there was no way I was not going to finish."

By the time Martinez fished his collegiate career, he was off to the pros. He then continued as long as he could there, including extending his career in Mexico, as he attempted to make the majors, but he never made the bigs.

Martinez' career began that year in 1989, taken by the Angels in the ninth round out of Cal State Northridge.

Martinez threw another complete game, a five-hitter, for Northridge in March 1989, against USC. USC Mike Gillespie later praised Martinez' ability to fool batters, according to The Times.

"He forever managed to be inside the skulls of our hitters and kept them from knowing what was coming next," Gillespie told The Times. "We've seen a lot of good pitchers this year and he's as good as there is."

Martinez started with the Angels at short-season Bend. He saw 12 starts there and ended with a 6-4 record and a 4.52 ERA.

Arm problems, though, led to Martinez' release in 1992. He then landed in Mexico, where he worked  to extend his career. He played four seasons there, getting a four-game look with the Dodgers at AAA Albuquerque in 1993.

He also later saw eight appearances with independent Palm Springs in 1996 to end his career.

In August 1996, as he played for Saltillo in Mexico, Martinez told The Times why he continued to pitch despite constant pain in his throwing shoulder. 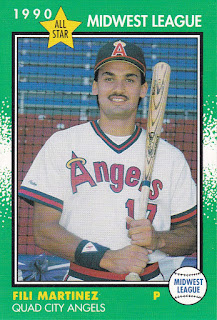