Eric Karros knew guys came and went in the game; He stayed in the bigs over 14 seasons

For Karros, though, he knew the award meant the past. He knew he needed to focus on the future, according to The Associated Press.

"It keeps you going, knowing guys come and go in this game," Karros told The AP after winning the award. "The trick is not getting there but staying, having some longevity. I've only played one year, and my goal is to play a number of years."

Karros won the award with a season where he hit 20 home runs, knocked in 88 and hit .257. He then went back out in 1993 and started on his path toward realizing his goal.

By the time his career ended, Karros had seen time in a total of 14 major league seasons, hit 30 or more home runs in a campaign five times and turned in a career batting average of .268.

Karros' career began in 1988, taken by the Dodgers in the sixth round of the draft out of UCLA.

"I wanted to go higher, but finally I figure, 'I just better go play and prove it to people,' " Karros told The Los Angeles Times later of his draft position. "It's like my father says, 'There are no shortcuts.' "

Karros started with the Dodgers at rookie Great Falls. He made AA San Antonio in 1990 and then AAA Albuquerque and Los Angeles in 1991.

He got into 14 games in his first trip to the Dodgers. He went 1 for 14. He then returned for 1992 and had his breakout season. He won Rookie of the Year going away. He garnered 22 of 24 first-place votes.

Karros continued with the Dodgers in a full-time capacity through the end of the decade. In one season, 1997, he played in all 162 games the Dodgers saw.

Karros stayed with the Dodgers through 2002. He then moved to the Cubs for 2003 and helped the club to the NLCS. He then finished in 2004 with 40 final games with the Athletics. 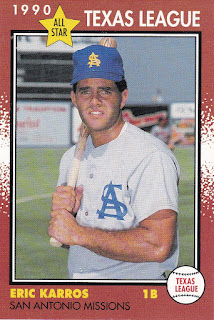