Bob Burgess picked up his first baseball job down the road from college, then moved to Canada

Bob Burgess didn't have to look far for his first job out of college, his first baseball job, at least.

Burgess went to Clarkson University in Potsdam, NY, and graduated from there with a degree in business management.

But, for his first baseball job, he just had to go down the road about 70 miles to the closest minor league team to the college town, Watertown.

In 1988, Burgess signed on with the short-season Watertown Pirates as assistant general manager.

Burgess' career in minor league baseball, however, appeared short-lived. It lasted as few as three seasons.

Burgess' arrival in Watertown, however, coincided with the final season of the Pirates' stay there. The Pirates had called Watertown home since 1983.

But, after 1988, Burgess' first year as team assistant GM, the Pirates moved their short-season club to Welland, Ont., - and Burgess followed.

Burgess again served as the club's assistant general manager for 1989. He also got to return to Watertown as the Indians soon back-filled the city with its own short-season team.

In November 1989, Burgess' work as assistant GM paid off with a promotion, at the age of 26, to full general manager. 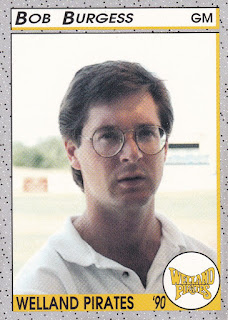