Originally published Aug. 11, 2011
The Red Sox' starting catcher was injured in this July 1995 contest and in stepped backup Bill Haselman. Only the situation was more difficult than most, Haselman noted later to The Hartford Courant.

Haselman stayed with the Red Sox through 1997, his final year getting the chance to start, but he had throwing problems. He then played with the Rangers and Tigers through 2002.
Also read the July 2012 interview: Bill Haselman, Same Game 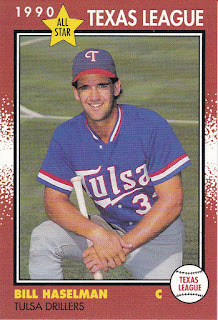