His high school tied up in extras of this May 1985 playoff game, Ben Johnson found himself - and his team - the beneficiary of some defensive miscues, according to The Eugene Register-Guard.

After being hit by an 11th-inning pitch to make it to first, Johnson made it to second, survived an odd throwing play to come around and score on an overthrow, The Register-Guard wrote.

Johnson went on to play baseball in college and in the pros. His pro career, however, left little time for gray hairs. His pro career consisted of a single season, 40 games.

Johnson's pro career began and ended in 1990, taken by the Pirates in the 29th round of the draft out of Oregon State. Johnson was also credited by his full name, Benjamin Johnson.

Johnson played his high school ball at Eugene's Sheldon High. He won league MVP honors and honorable mention all-state in his final year there, a year he batted .394.

He singled and scored in another May 1985 game and a double and two singles in a third.

Johnson also played the summer of 1988 in Alaska, for the Alaska Goldpanners of Fairbanks.

With the Pirates, Johnson played 1990 with short-season Welland. On his Welland card, he cited Mike Schmidt as his favorite pro "because he inspired me and was a true professional." 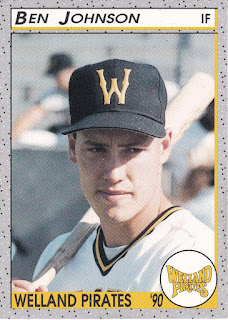