Andre Redmond played five pro seasons in the field and on the mound; He then returned home

Andre Redmond found himself back home in Seattle by May 1991, his four-season minor league career over, according to The Seattle Times.

But he tried to continue playing, for a local semipro team, the Seattle Central Area Bombers, The Times wrote.

"This is home, all right," Redmond told The Times at a Bombers game. "I played on this field when I was 13 years old. I used to live right up the street. My grandmother still lives there."

Redmond started there in Seattle, signing with the Pirates out of Bellevue Community College. He went to Bellevue out of Seattle's Roosevelt High.

Redmond spent his first two seasons in the Pirates organization in the field, then he turned to pitching.

He moved to single-A Augusta and short-season Welland for 1990. Between them, he went 1-3, with a 5.80 ERA. He went two innings and gave up three earned in an August game for Welland.

Redmond's final pro time then came early in 1991. He went seven outings and gave up nine earned in eight innings to end his career. 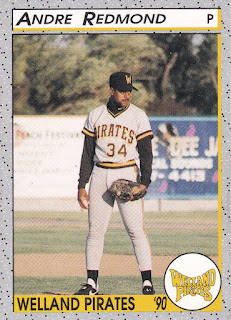