Alex Pacheco started slowly for the Welland Pirates in 1990, something The Pittsburgh Press noted in a rundown of the minors.

Pacheco went on to pick up two wins that year, but those wins weren't enough. That season proved his only season as a pro.

Pacheco's career began and ended that year in 1990, signed by the Pirates the year before as a free agent out of his native Venezuela. Pacheco was also credited as Alexander Pacheco.

His card lists him as a resident of Maracay, a city about an hour and a half west of Caracas.

With the Pirates, Pacheco played his season at Welland. He served as a starter, starting 13 games for the short-season club. He went 2-6 overall and ended with a 5.58 ERA. He also struck out 67 over 61.1 innings of work to end his career. 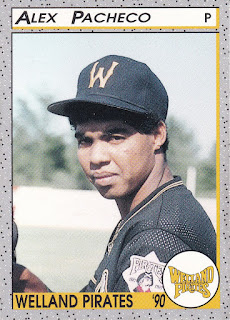