Tom Green wanted a chance to contribute; Did so over four seasons, made AAA, not bigs

Tom Green moved up to AA Carolina by June 1991 and the catcher quickly made his presence felt, according to The Wilson Daily Times.

He did so by hitting a game-winning three-run home run, The Daily Times wrote.

"I just want a chance to contribute," Green told The Daily Times later. "I'm just trying to stay in the game and stay disciplined."

Green went on to contribute in the Pirates system over four seasons. He made AAA for 21 appearances over two seasons. He never made the majors.

Green's career started in 1990, taken by the Pirates in the 30th round of the draft out of Georgia Tech. Green was also credited by his formal name, Thomas Green.

Green started with the Pirates at short-season Welland and at single-A Augusta. He got into 54 games between them, hitting .236.

He returned to Augusta for 1991 and made AA Carolina. He got into 64 games at Carolina, hit two home runs and ended with a .198 average.

Green played 1992 between high-A Salem, Carolina and AAA Buffalo. He saw 13 games at Buffalo and went 5 for 24.

He then returned to Carolina for much of 1993 and saw another eight games at Buffalo. He hit a sacrifice fly in a May game for Carolina and  went 9 for 26 at Buffalo. That season marked his last season as a pro. 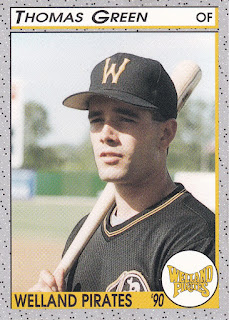