Tim Edge knew he had to wait his turn; Played at AAA over five seasons, his majors turn never came

Tim Edge arrived at AAA Buffalo in July 1994 and he knew factors beyond his control would determine his playing time, he told The Buffalo News.

He knew other catchers, when healthy, would get priority, he told The News.

"I don't know how long I'll be here," Edge told The News. "With a guy like Jerry Goff, who's been in the big leagues, he's going to play. And there's (Keith) Osik, too. I just got to wait my turn."

Edge's stay in Buffalo that year yielded six appearances. He returned to AAA over three of the next four seasons. In a career that spanned nine seasons, he never got to take the final step to the majors.

Edge's career began in 1990, taken by the Pirates in the sixth round of the draft out of Auburn University.

Edge started with the Pirates at short-season Welland. He hit .215 in 63 games, with one home run.

"Every start Jason's had here has been a quality start," Edge told The Tennessean. "He's been exceptional since he's been here. It would have been nice to get him this win." 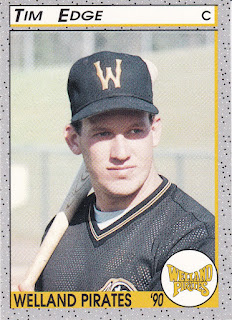