Scott Cepicky saw changes in his position and swing as he turned pro; Played six seasons, made AAA

Originally published March 31, 2017
Scott Cepicky went through some changes in his move to the pros in 1989.

He moved from college to rookie ball. His new coaches also worked with his swing, and his position, giving him a look behind the plate, according to his hometown St. Louis Post-Dispatch.

Cepicky's catching experiment didn't stick. Whether or not the batting stance changes stuck, Cepicky never got to hit in the majors. Cepicky played six seasons. He saw AAA, but no higher.

Cepicky's career began that year in 1989, taken by the White Sox in the 23rd round of the draft out of the University of Wisconsin. He went there out of Vianney High School in Kirkwood, Mo.

At Wisconsin, Cepicky played both football and baseball, serving as a punter on the football team. He punted a school record 231 times.

With the White Sox, Cepicky started in the rookie Gulf Coast League. He hit .316 over 40 games.

He then moved to single-A South Bend for 1990. His .312 batting average won the league hitting title.

Cepicky moved to high-A Sarasota for 1991, hitting .290. He hit a double in the league all-star game.

Cepicky briefly saw AAA Nashville in 1993, getting into 45 games there. He hit .212 and played the rest of the year at Birmingham. He then rounded out his career in 1994, with the Twins at AA. He hit .225 over 96 games, marking his final time in the pros. 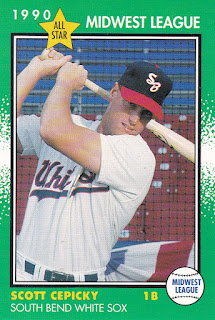