Mike Hook tried to make the most of his opportunities, as starter and reliever; Saw seven seasons, not bigs 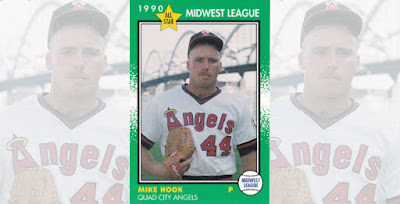 Originally published April 28, 2018
The Yankees made Mike Hook into a reliever at single-A Fort Lauderdale. The Angels in 1990 gave him a look at closing with single-A Quad City and he seemed to take to the role, according to The Quad City Times.

And he did so after spending the off-season unsure he'd continue until an old high school teammate put in a good word for him with the Angels, The Times wrote.

"I'm just trying to make the most of the opportunities I'm given," Hook told The Times that May. "As a reliever, you never know when you're going to get a chance so I want to make sure that I can get whatever I can every time out."

Hook saved seven for Quad City that year and he got a look at AA Midland, his first look at that level in five seasons. He saw AA again two years later with the Orioles, but he never saw higher.

Hook's career began in 1986, taken by the Astros in the second round of the draft out of Santana High School in California.

At Santana, Hook threw a perfect game in May 1986, toning down his usually jovial personality in the process, according to The Los Angeles Times.

"This is the most serious I've ever been," Hook told The LA Times afterward. "I was very serious. I just wanted to go out and get the job done."

Hook started with the Astros in the rookie Gulf Coast League and at single-A Osceola. He went 4-3, with a 2.74 ERA.

Hook arrived with the Angels in 1990. He saw seven relief appearances at AA Midland, then spent the rest of the year at Quad City. He played 1991 with the Orioles at high-A Frederick and then saw six final starts in 1992 at AA Hagerstown to end his career. 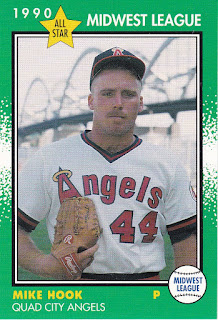