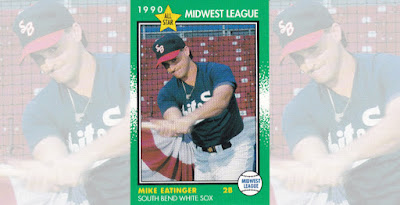 Originally published April 29, 2017
Mike Eatinger readied to return to the field in fall 1991 for instructional league after a season lost to a cancer diagnosis, according to The Chicago Tribune.

Eatinger went through chemotherapy and radiation treatment, coming out the other side ready to play again with a new perspective, The Tribune wrote.

"I'm going to be a different ballplayer, I'll tell you that," Eatinger told The Tribune. "I'd go 0-for-5 and I'd throw helmets and break bats. None of that. The sun will rise the next day ... "

Returned that fall and then played again in 1992. That season back in the pros, however, turned out to be his last.

Eatinger's career began in 1989, taken by the White Sox in the fifth round of the draft out of the University of California, Riverside.

At Riverside, Eatinger won first team all-conference honors in 1988 and second team in 1989. He went 6 for 8 in a May 1989 double-header, knocking in five runs.

With the White Sox, Eatinger played his first season between the rookie Gulf Coast League, short-season Utica and single-A South Bend. He got into 57 games between them, hitting .270.

Then came the cancer, found in his lymph nodes. He went through chemotherapy and then a bone marrow transplant. Eatinger found out early in the season, before he even got into a game. His teammates offered support before he left to undergo treatment, The Riverside Press-Enterprise wrote.

"I never wanted to leave these guys, but I knew I had to," Eatinger told The Press-Enterprise. "I was the first one out of the locker room, but I looked back and promised myself I'd be back. It was like a scene out of a movie. I was just waiting for the background music."

Eatinger returned for fall instructional league and then won a spot with high-A Sarasota for 1992. He got into 71 games, hitting .244, ending his career. 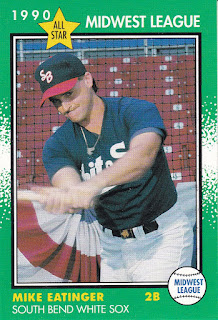