Mark Futrell didn't play much in high school, but he still hoped to play professionally, according to The South Florida Sun-Sentinel.

He pursued that dream through a baseball camp and tryouts, The Sun-Sentinel wrote.

"I hope that the guy sees me and notices that I can pitch," Futrell told The Sun-Sentinel before a June 1987 tryout. "It's going to be the opportunity of a lifetime. If I get signed, my whole life starts right there."

Futrell didn't sign professionally then. But he did got to college and later turned pro. He played in six total seasons, four of them in independent ball. His affiliated career topped out a high-A.

Futrell's pro career began in 1990, signed by the Pirates as an undrafted free agent out of Miami-Dade College.

Futrell started with the Pirates at short-season Welland and single-A Augusta. He saw three relief outings at Augusta and 16 at Welland. He went 2-5 overall, with three saves and a 1.73 ERA.

He gave up a bases-clearing double in an August game against Pittsfield. He pitched a scoreless inning of relief in another August contest.

Futrell moved to Augusta and high-A Salem for 1991. He saw 10 outings at Salem and had a 3.98 ERA. That season turned out to be his final in one in affiliated ball.

Futrell then played 1994 at independent Winnipeg and helped the team to the league playoffs. He also took a win in the championship series. Earlier in the year, he picked up a win in July on five hits.

Futrell returned to Winnipeg for shortened 1995 and 1996 seasons to end his career. 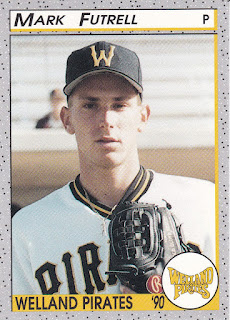