John Zaksek had a perfect day in college, played three pro seasons, topped out at high-A

Zakzek, the University of Cincinnati center fielder, picked up four hits on the day, worked a walk and knocked in two on a double, The Enquirer wrote.

Zakzek signed two months later as a pro with the White Sox. He played three seasons for four teams. He never made it above high-A.

Zakzek's career began that June, taken by the White Sox in the 14th round of the draft out of Cincinnati. He went to college out of Poland Seminary High in Poland, Ohio.

He started with the White Sox in the rookie Gulf Coast League and at short-season Utica. He hit .287 between them, with one home run and 12 stolen bases. He went 3 for 3, with two RBI in a June game at Utica.

Zakzek moved to single-A South Bend and returned to Utica for 1989. He also got a game at high-A Sarasota. He hit .240 over 85 games on the year. 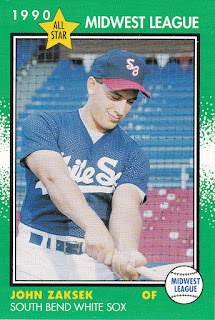