The Welland Pirates had an official vehicle and the Ford Aerostar Van was it.

Rick Fuss, the Fuss of Farr and Fuss Lincoln Mercury Sales was right there standing next to it on the Farr and Fuss card in the 1990 Welland Pirates team set.

Along with the Aerostar being designated the official vehicle of the team, Farr and Fuss also sponsored that team set. For their sponsorship, they got a small ad on the back of each card and their very own sponsor card.

According to the card back, Farr and Fuss offered sales, service, parts, leasing, as well as a collision center at 980 Major St. in Welland.

"Farr and Fuss Lincoln Mercury does it all!" the card back reads.

The Welland Pirates had arrived in town the year before, in 1989, as the short-season affiliate of the Pittsburgh Pirates. They stayed around for six seasons, through 1994.

It was unclear how long Farr and Fuss stayed around Welland  - an individual LinkedIn profile suggests it continued through at least 1994. But an apparent successor, Farr Ford Lincoln, stayed at 980 Major St. into 2009, when it closed.

The Welland Tribune noted Farr Ford's end in March 2009, as it abruptly closed. The Welland Pirates then 15-years gone, a sign on the Farr Ford door referenced another sport, reading "Gone fishing," The Tribune wrote.

In the years since, the Farr Ford site appears to have taken on a new use, as a Water & Wastewater Services Central Maintenance Facility for the Niagara Region. 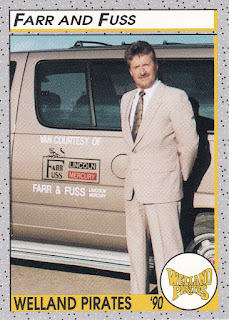