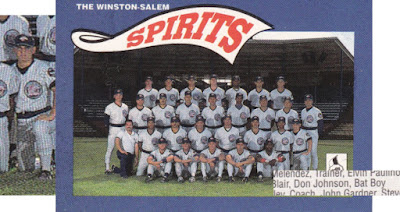 When the 1990 Winston-Salem Spirits gathered for their team photo on the infield at Ernie Shore Field, they included each player, as well as the manager, coaches and trainer.

But they also included one other part of the team, they included the batboy, identified on the card back by the name Don Johnson. Johnson is there, in the second row on the far right, kneeling, according to the card back.

No other information is given about Johnson on the card. He is actually the only person included in the team photo who does not appear on his own card elsewhere in the team set.

But Winston-Salem, and other teams, have also included batboys in their team photos. Two years earlier, Winston-Salem batboys Ed Hrynkow and Geoff Burdick made their way into the 1988 team photo.

There have been some notable batboy connections to Winston-Salem, either batboys themselves or former batboys.

One of the earliest Winston-Salem-connected batboy reference has to be the shortest game on record, a 31-minute affair Aug. 30, 1916, a game between the Asheville Tourists and the Winston-Salem Twins, according to the Society for American Baseball Research.

Asheville's batboy for that season, and for that game against Winston-Salem, was a 15-year-old Thomas Wolfe, who went on to become a well-known writer, the society wrote.

Years later, Winston-Salem saw one former batboy (who served as batboy for Birmingham) actually play for the club and another batboy, one for Winston-Salem, featured in the local paper.

Greg Paiml played for Winston-Salem over three seasons, from 2008 to 2010. Paiml grew up near Birmingham and, while in high school, served as a batboy for the Barons and in other roles.

Then, in 2015, The Winston-Salem Journal featured a team batboy one on the autism spectrum, Kevin Pearman.

"I like working with the players and coaches, the staff, even the umpires," Pearman told The Journal then. "They welcomed me really well. It really doesn't feel like a job, yet I'm getting paid and getting great work and life experiences." 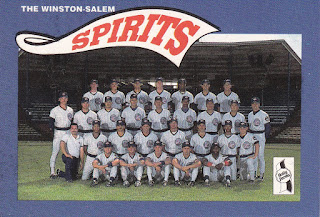