David Tellers may not have been tall for a pitcher, but at San Jose State in California, he showed he could pitch, according to The Los Angeles Times in 1989.

By early April that year, the 5-foot, 11-inch hurler had amassed an unbeaten 11-0 record and in one outing took a no-hitter into the seventh, The Times wrote.

"I knew a lot of schools were looking for the over 6-foot guys who throw 90 m.p.h. fastballs," Tellers told The Times. "I've always been a finesse pitcher."

Tellers ultimately took his finesse pitching from San Jose on to the pros. He saw seven total seasons and topped out at AA.

Tellers' career began in 1990, taken by the Pirates in the 28th round of the draft out of San Jose State University.

Tellers started his college career at Rancho Santiago College. He threw six innings of shutout relief there for an April 1987 win.

At San Jose in February 1990, one of Tellers' coaches at Rancho Santiago talked up Tellers to the San Jose's Spartan Daily.

Tellers started with the Pirates at short-season Welland. He got into 20 games in relief and went 4-2, with a 1.36 ERA.

He returned to affiliated ball with the Rockies at AA New Haven for 1994 and 1995. He then finished out his career in 1996 at independent Minot. 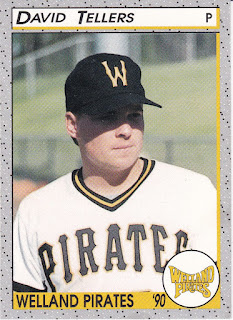