Danny Matznick saw his career shortened by injury, then focused on his son

Originally published April 25, 2017
Danny Matznick played six seasons as a pro, his career shortened by shoulder, elbow and knee injuries, according to SaukValley.com.

Years later, though, Matznick found himself with another connection to the game, his son Quinton. And the high schooler was having success, the site wrote.

"It is all about him now," Matznick told SaukValley in August 2013. "I did a lot of good things in baseball, but I never got to win a state championship or go to a tournament like the Central Regional."

The father's career began in 1989, taken by the White Sox in the fourth round of the draft out of Sterling High School in Illinois.

At Sterling, Matznick also played football, serving as the school's quarterback. He suffered a knee injury prior to his junior year.

Matznick played his final professional season in 1994. He got seven starts between the GCL and South Bend, ending his career. 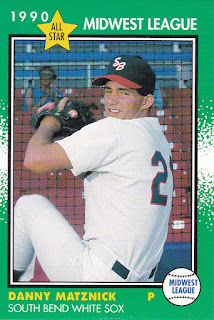