The young woman spoke to the courtroom about former major leaguer Chad Curtis.

The veteran of 10 major league seasons who helped the New York Yankees to two titles stood convicted of criminal sexual conduct against her, as well as sexually assaulting two other girls, according to MLive.com.

"He doesn't deserve to be in society for what he's done," the young woman told the courtroom as Curtis received 7 to 15 years in prison, according to MLive.

Curtis was tried and convicted of the offenses in 2013, sentenced just over 12 years after he last saw a major league field.

Curtis' baseball career began in 1989, taken by the Angels in the 45th round of the draft out of Grand Canyon University.

Curtis started with the Angels at single-A Quad City and in the rookie Arizona League. He returned to Quad City for 1990 and then made AAA Edmonton in 1991.

Curtis moved to the Tigers in a trade for 1995. He then moved to the Dodgers in mid-1996, then the Indians for 1997 and to the Yankees later that year.

With the Yankees, Curtis did not play in the 1998 World Series, but he made the 1999 roster and hit a game-winning home run in Game 3 against the Braves, his second home run of that contest.

"Always somebody you don't expect," Atlanta manager Bobby Cox told The Associated Press afterward. "You never know where it's going to come from."

Curtis moved to the Rangers for 2000, then finished out his major league career there with 38 games in 2001.

Curtis eventually settled in Michigan, and volunteered as a weight room strength trainer at a high school there.

He was arrested in May 2012, accused of sexual misconduct by touching two teenage girls at the school. A jury later convicted him of a total of six counts of criminal sexual conduct related to three girls.

At his sentencing, the judge, Amy McDowell, called Curtis a "predator," according to The AP.

"You certainly are a threat to any community you get into," McDowell told Curtis, The AP wrote.

Curtis remains in prison in February 2020. His earliest possible release date is in September 2020. 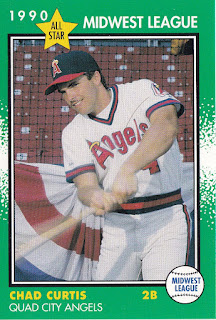