Brad Mills went from an injury-shortened playing career to a long career as manager, including time as Astros skipper 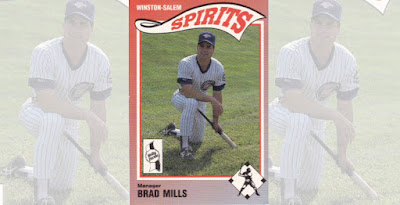 Brad Mills last saw the majors three years earlier, with the Expos. As he tried to return to the bigs in 1986 with the Cubs at AAA Iowa, though, he stepped wrong on the base paths and tore ligaments in his knee, he recalled later to The Des Moines Register.

The injury meant his playing days were over, he told The Register, and his new career was about to begin.

"They didn't feel the timing was right for me to miss almost two years out of my career," Mills told The Register in April 1992, "so they offered me a chance to be a manager."

Mills got back to the bigs with the Phillies in 1997, as first base coach, and he's stayed in the majors almost every year since, including three seasons spent as the manager of the Astros in Houston.

Mills' long career in baseball began in 1979, taken by the Expos in the 17th round of the draft out of the University of Arizona.

Mills started with the Expos at single-A West Palm Beach. He then made the jump to AA Memphis and AAA Denver for 1980. That June, he debuted in Montreal.

He then played with Montreal in each of the next three seasons, including a career-high 54 games in 1982. He hit .224 that year, with one hone run, his only home run in the majors.

Mills continued playing in the minors into 1986, his brief season with the Cubs at Iowa. He then started his coaching career.

Mills served 1987 with the Cubs as manager at rookie Wytheville. He then managed at Charleston and Peoria before he arrived at high-A Winston-Salem in 1990.

Mills spent a season as bench coach with the Expos in 2003, then rejoined Francona in Boston for the club's title-winning 2004 campaign as bench coach.

After six seasons in Boston, Mills then got his chance to manage his own major league team, the Astros.

Mills got the Astros job with a glowing report from Francona, Houston owner Drayton McLane told The Associated Press upon hiring Mills.

"He said, 'I have given Brad more responsibility than I have ever seen a bench coach have,' " McLane told The AP. "He totally runs spring training and he handles most of the communication with the players. Terry said he's been the assistant manager and has gathered all the necessary experience."

Mills connected with Francona again in 2013, Francona then the manager for Cleveland. He first served as third base coach and then again as Francona's bench coach. He continues in that role in 2020.

In 2017, Mills filled in for an ailing Francona as manager of the American League squad at the All-Star Game.

"Getting this responsibility is very humbling," Mills told The AP then. "I'm thrilled to be here, but I definitely would love to have Terry sitting here in this chair." 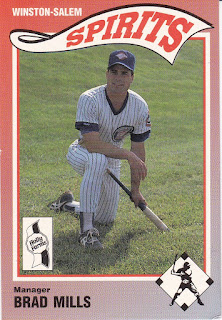