Bob Vancho got off to a poor start his first pro season; Saw three pro campaigns 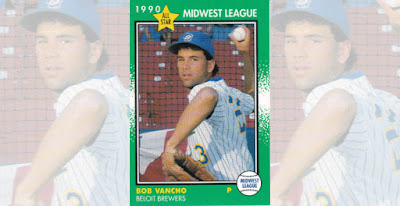 Originally published June 15, 2017
Bob Vancho got off to a bad start in this 1989 game for rookie Helena.

In his first season as a pro, Vancho had given up nine hits by the fourth inning and saw his team down 4-0, according to the book Stolen Season.

Vancho finished that year with a 6.04 ERA. He went on to finish two more professional seasons. He made it to high-A, but he didn't make it higher.

Vancho's career began that year in 1989, taken by the Brewers in the 23rd round of the draft out of Housatonic Community College in Connecticut. He played his high school ball at Trumbull High in Trumbull, Conn.

Vancho played 1991 at high-A Stockton. He got into just six games, all in relief. He gave up seven earned in 12 innings, ending his career. 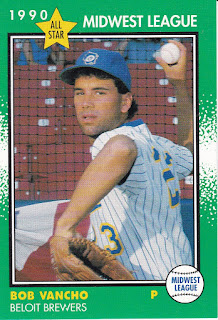