Bill Earley got his major league shot as a player in 1986; Later helped others get theirs as a coach

After a couple good minor league seasons, Bill Earley felt he deserved a shot at the majors in 1980, he told The Cincinnati Enquirer in May 1986.

But his velocity appeared to keep him down, he recalled to The Enquirer.

"'He doesn't have the velocity,' was the rap," Earley told The Enquirer. "But a sinkerballer, a forkballer, doesn't need velocity. My attitude now is the same as it was then I deserve a shot."

Earley eventually did get his shot, later that season. Earley made the Cardinals as a 30-year-old late-September call-up and saw three total innings of work. He didn't give up a run and he didn't get back.

Earley then went on to a career as a minor league coach, helping others get their shot. His coaching career included four seasons spent at AAA Iowa.

Earley's career began in 1978, signed by the Cubs out of Miami University of Ohio.

He played 1980 at Midland and at AAA Wichita, turning reliever. He then continued with the Cubs at AAA Iowa over the next four seasons. He never saw Chicago.

He worked a nerve-wracking two innings of relief in an April game, getting out of jams in both frames, The Louisville Courier-Journal wrote.

"I'd a lot rather have one of those saves where you've only got to get one guy out," Earley told The Courier-Journal after earning the save.

His shot then came Sept. 22, against the Mets in Flushing. He worked two innings against the eventual champions, walked one and struck out two. He then walked one without getting an out Sept. 27 at home against the Cubs and finally saw Wrigley Oct. 4 and pitched a scoreless inning.

Earley returned to Louisville for 1987, then started his coaching career. He served as pitching coach with the Cubs at rookie Wytheville in 1988, then single-A Charleston. He arrived at high-A Winston-Salem for 1990 and returned there in 1991. 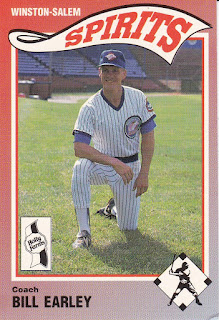