Working as trainer in minor league baseball involved not only the basic medical tasks, but it also involved getting to know the players trainers work with, Steve Melendez told The Daytona Beach News-Journal in 2003.

"I know everything there is to know about these guys, because I need to know where they're coming from," Melendez told The News-Journal. "When you're in pro ball, and you're with them 140 games, it's nice to know what they're about. I try to know the human side of them."

Melendez spoke from experience. By that point, he'd served as a trainer in the minor leagues for 18 seasons. And he's continued in the game in more recent years.

Melendez' baseball training career began in 1986, with the Cubs. Prior to joining the Cubs, he graduated from Brooklyn College in 1982. He's a native of the Bronx.

Melendez started with the Cubs at short-season Geneva and returned there for 1987. He went to Peoria in 1988 and arrived at Winston-Salem in 1989 and stayed there through 1992. He worked in the off-season as a high school basketball trainer in New York.

He then spent two seasons at Daytona and moved up to AA Orlando. At Orlando, he won league Trainer of the Year honors in 1996.

Melendez returned to Daytona by 2002 and stayed there through at least 2007. He served as trainer for the Cubs in Mesa in 2013 and as minor league international medical coordinator for the Tigers for 2017. 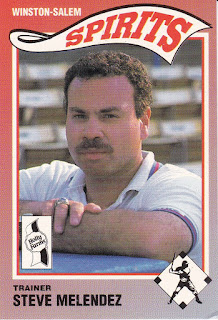