Steve DiBartolomeo liked pitching in relief; He pitched as a pro over three seasons, made AA

The Cubs talked about making reliever Steve DiBartolomeo a starter in 1990, DiBartolomeo told his hometown Hartford Courant in May 1990.

DiBartolomeo, though, wasn't sure he could handle the life of a starter, getting four days off, he told The Courant.

"Life on the road might really be tough," DiBartolomeo told The Courant. "This way, I come to the park every day knowing I have a shot to pitch. That's the way I like it."

DiBartolomeo never did move to starting full-time - he started four games that year and relieved in another 37. DiBartolomeo, though, never got to start or relieve in the majors. He played four seasons and made it to AA Charlotte, but not the bigs.

DiBartolomeo's career began in 1989, taken by the Cubs in the 21st round of the draft out of the University of New Haven.

DiBartolomeo started with the Cubs at rookie Wytheville and single-A Charleston. He went 5-2 between them, with a 1.76 ERA over 24 relief outings. He also saved three. 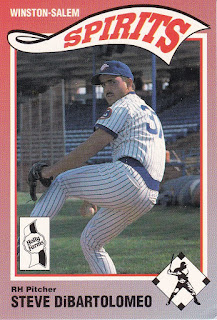