Originally published Nov. 9, 2019
Ronnie Rasp played three pro seasons, but he could have played more, if not for an off-season job accident, according to The Shelby County Reporter.

Rasp worked for UPS, The Reporter wrote, and an unloading accident left him with a crushed finger on his pitching hand, an injury that caused him to lose all ball control.

“I can still throw as hard as ever," Rasp told The Reporter in 2011, "I just don't know where the ball is going to wind up."

In those three seasons, Rasp played for four different clubs in the Cubs system. He topped out at high-A Winston-Salem. He didn't make it higher.

Rasp's career began in 1988, taken by the Cubs in the 32nd round out of the University of Montevallo in Alabama.

With Montevallo in 1987, Rasp took the loss as a starter in a game against Jacksonville State.

Rasp started with the Cubs at rookie Wytheville. He went 5-6, with a 4.14 ERA over 22 outings, five starts. He also saved two.

He moved to single-A Charleston for 1989. He saw 54 relief appearances there, perhaps the story behind his "Horse" nickname on his 1990 Peoria card. He picked up eight wins, 15 saves and an ERA of 2.87.

Rasp played 1990 between single-A Peoria and Winston-Salem. He saw 26 relief outings at Peoria, saved three and had a 3.77 ERA. He also saw four games at Winston-Salem, giving up five earned in 3.2 innings. That season proved his final as a pro. 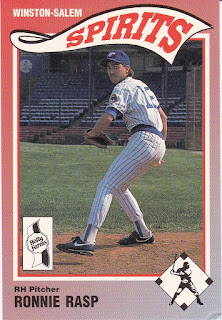