Mark Thomas toughed it out his first year to play five pro seasons; Never made AA

Originally published May 1, 2018
Mark Thomas finished his first pro season in 1987 and his mother described it for his college's student newspaper, the Santa Rosa Oak Leaf.

"Mark said he was really lonely," Thomas' mother Rene Thomas told The Oak Leaf that October. "Going down there, he knew no one. It was tough at first. Plus, with the heat and humidity in Florida, he lost 10 pounds."

Thomas played that first year between the rookie Gulf Coast League and short-season Watertown. He went on to play five seasons. His mother never got the chance describe her son making the bigs. He never made AA.

Thomas' career began that year in 1987, taken by the Pirates in the sixth round of the draft out of Santa Rosa.

Thomas got into 50 games his first year with the Pirates between Watertown and the GCL. He hit .253, with six home runs and 28 RBI.

The outfielder played one more season with the Pirates at short-season Welland and single-A Augusta. He hit .240 in 64 games. He knocked a three-run double in a June game for Augusta. 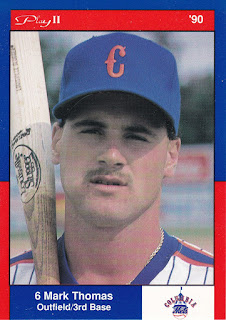