Jim Bullinger switched from shortstop to pitching, then made the majors over seven seasons

Jim Bullinger made the majors for the first time in 1992. He then promptly made a bid for a no-hitter, The Los Angeles Times wrote.

In his third major league start that August, Bullinger took his bid into the eighth inning before he finally gave up a hit, a home run, The Times wrote.

"I knew when I warmed up I had good stuff," Bullinger told The Times afterward. "But I didn’t expect this."

Bullinger debuted with the Cubs that year in his seventh pro season - his third since switching from shortstop to the pitching mound. He went on to see time in seven total major league campaigns. He then didn't stop pitching until 2005 as he continued in the minors, independent ball and in Mexico.

Bullinger's career began in 1986, taken by the Cubs in the ninth round of the draft out of the University of New Orleans.

That year at Charlotte, though, started his transition to pitcher. His manager Jim Essian put him in to pitch out a runaway game. He struck out four over those two frames, The Washington Post wrote.

"If I hadn't become a pitcher, I probably wouldn't be with the Cubs," Bullinger told The Post. "And I possibly wouldn't be playing baseball anymore. It was the most important decision of my life."

Bullinger spent his full-time season on the mound in 1990 at high-A Winston-Salem and AA Charlotte. He went 10-10 between them, with a 4.16 ERA.

He then played 1991 between AA Charlotte and AAA Iowa. He then debuted in Chicago the next May.

He started 1996 with a gem as he went eight innings and gave up five hits in a win against the Dodgers.

"I've struggled all spring with my fastball away from right-handed hitters," Bullinger told The Chicago Tribune after that April win, "and (Friday) I had it."

Bullinger ended that year 6-10, with a 6.54 ERA. He then played 1997 with the Expos and concluded his major league time with two outings in 1998 with the Mariners.

Bullinger went on play briefly in the minors with the Dodgers in 1999, Cardinals in 2001 and White Sox in 2005. In between, he played in independent ball and in Mexico. By the time he was done in 2005, he'd seen time in 17 pro seasons, seven of those in the majors. 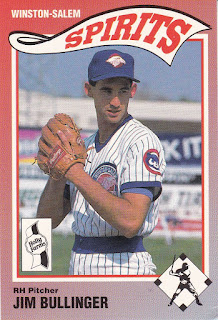