Jeff Massicotte came on in tough spot at Geneva and struck out three; Played four pro seasons, never made AA

Jeff Massicotte came on for the Geneva Cubs in the ninth inning of this July 1987 contest, bases loaded and with the tying run at the plate, according to The Rochester Democrat and Chronicle.

Massicotte then proceeded to pick up his 10th save on the year in the most efficient way possible - he set down the first three batters he faced on strikes, The Democrat and Chronicle wrote.

Massicotte earned that save in his first season as a pro. He went on to see time in three more campaigns. He made it to high-A, but didn't make it higher.

Massicotte's career began that year in 1987, taken by the Cubs in the 11th round of the draft out of Florida State College in Jacksonville. He played his high school ball in Meriden, Conn.

Massicotte then arrived at high-A Winston-Salem for 1990. He got into six games there and gave up three earned in eight innings of work. That season marked his last as a pro. 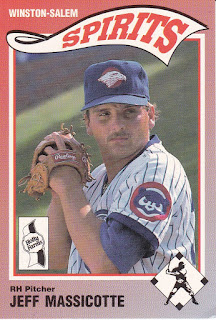