James Harris got base hits over pro career that spanned 10 seasons; Never made AA

Originally published July 10, 2018
With a runner on third base in the third inning, Columbia's James Harris stepped up to the plate and knocked a run-scoring single, The Spartanburg Herald-Tribune wrote.

Columbia went on to beat Spartanburg by a score of 8-3, while Harris went 3 for 5, with two RBI, The Herald-Tribune wrote.

"They don't miss opportunities," Spartanburg manager Mel Roberts told The Herald-Tribune. "They got the base hits when they had runners in scoring position, and we didn't."

Harris got the base hits over a professional career that spanned 10 seasons, but he never got enough to make it to the high minors. He never made the majors.

Harris' career began in 1988, taken by the Mets in the 45th round of the draft out of St. John the Baptist High in West Islip, Long Island.

Harris started with the Mets in the rookie Gulf Coast League and at rookie Kingsport. He hit .288 over 60 games, with 34 RBI.

Harris isn't credited as playing in 1993. He then returned for independent ball in 1994. He played two seasons at Tyler in the Texas-Louisiana League, picking up three hits in a July 1994 game.

He then played two seasons at Springfield in the Frontier League. He saw his last recorded playing time in 2001 after three seasons away in 2001, ending his career. 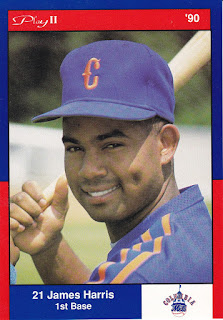