Gary Scott made the great achievement, he made the majors; Played with Cubs over two seasons

As he prepared to make his major league debut in April 1991, Gary Scott expressed excitement to The Chicago Tribune.

"I look at it like today's my birthday," Scott told The Tribune. "I'm being born into Wrigley Field. At this time next year I'll be one year old."

Scott made that debut to start his third season as a pro. He saw Wrigley the next year, but those two seasons marked his only seasons in the bigs. He saw 31 games for the Cubs in his first season there, and 36 the next, marking the extent of his major league career.

Scott's career began in 1989, taken by the Cubs in the second round of the draft out of Villanova. He was signed by Cubs scout Billy Blitzer.

That June, as he played for Winston-Salem, talked turned to the Cubs' needs in Chicago, according to The Newport News Daily Press. The third baseman Scott saw an opening there.

"I think my situation is pretty nice in the organization," Scott told The Daily Press. "I think if I continue playing well, I'll move up."

Scott's luck hardly improved in his second run with the big club. He played in Chicago for three stints, in April, June and September. In his 36 games, he hit .156.

Scott moved to the Reds and Twins organizations for 1993 by way of the Marlins. He played the season at AAA. Scott played three more seasons at AAA, with the Giants, Braves and Padres. He then rounded out his career in 1997, in Mexico.

Scott then went into business. Years later, the scout that signed him, Blitzer, recalled encountering Scott at a Villanova event honoring Scott for his college career. Blizer recalled to the Society for American Baseball Research that Scott apologized for not having a better career and disappointing Blitzer.

"Never think like that," Blitzer recalled responding, according to SABR. "You made the major leagues and that's a great achievement." 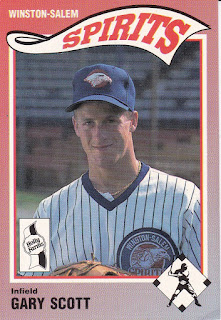