Fernando Ramsey had hardly played baseball before being drafted; Took his speed to bigs for 18 games 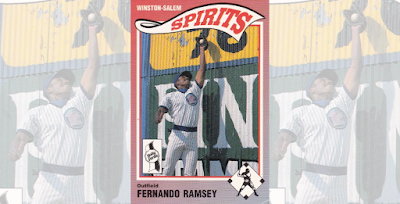 Fernando Ramsey hardly played baseball at all before the Cubs drafted him in 1987, according to The Chicago Tribune.

A track star from Panama, Ramsey made made his way to New Mexico State, where his speed garnered an inquiry from the school's baseball coach and then from a scout, The Tribune wrote.

"He told me the Cubs were going to draft me, and I said OK," Ramsey recalled to The Tribune in spring 1992. "That`s when other clubs started calling and talking to me, but I told them, no, I wasn't going to play. I didn't care for anybody else to know about me."

The Cubs did draft him and he started making his way up the ladder in his new sport. By that spring in 1992, Ramsey had made it up to AA Charlotte. In 1992, he made AAA Iowa and he made Chicago.

Ramsey's career began that year in 1987, taken by the Cubs in the 33rd round of the draft out of New Mexico State.

In a May 1991 game at Charlotte, Ramsey used his speed to score the game's only run against Orlando as he singled, stole second and made it to third on a grounder. He then came across on a slow roller, according to The Orlando Sentinel.

"I was thinking we have two chances to score," Ramsey told The Sentinel afterward. "I thought it was going foul, but when I saw it was fair I was happy. I was relieved."

Ramsey then made Iowa in 1992 and Chicago that September. Ramsey got into 18 games for the Cubs down the stretch. He went 3 for 25, knocked in two and didn't steal a base.

Ramsey returned to Iowa for 1993, then played 33 games in 1994 at AAA between the Reds and Mets. He also played in Mexico.

He played 1995 and 1996 at AAA Nashville with the White Sox, then ended his career in 1997 playing back in Mexico and at independent Bangor.

Ramsey has since settled in Texas and gone into real estate. 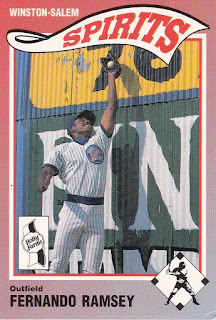