Felix Moya grew up in Nicaragua, stayed in El Salvador, played in minors for three seasons

The Expos had a player in Nicaragua they wanted, Felix Moya, but political turmoil there meant he couldn't come direct to the United States. He had to first stay six months in neighboring El Salvador, The Washington Post wrote.

The move irked officials in Nicaragua, an official told The Post, but the Expos got their player in Moya.

"We couldn't figure out how to get him out of {Nicaragua}," assistant Expos scouting director Frank Wren told The Post.

Once in the United States, Moya started his career. His career, however, lasted three seasons. He never made AA.

Moya's career began in 1990, signed by the Expos out of Nicaragua by way of El Salvador. His Jamestown card lists his residence as Santa Ana, El Salvador. 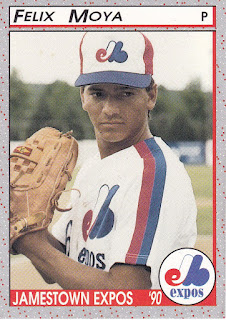