Eddie Williams had some luck on his first two professional home runs - they both went for grand slams, according to one of his card backs.

Those two home runs proved his only home runs in the outfielder's first two professional seasons. He went on to play in six pro campaigns and end with a home run total of 12. He never got the chance to hit a home run in the majors. He never made AA.

Williams' career began that year in 1986, taken by the Cubs in the third round of the draft out of Vallejo High in California.

Williams started with the Cubs at Wytheville. He hit .276 in 52 games. He also hit that one home run and stole 12 bases. His first grand slam came June 21 against Pulaski. He then got invited to that fall's instructional league.

Williams moved single-A Peoria and short-season Geneva for 1987. He hit .229 between them over 85 games. He saw 14 games at Peoria without hitting a home run. He got into 71 games at Geneva. His second career home run - and second grand slam - came July 20 against Batavia. He also stole 24 bases for Geneva. 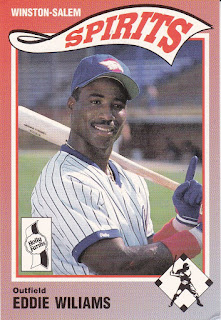