Cubs manager Don Zimmer went down a list of prospects in October 1990 and gave his assessment of each, according to The Chicago Tribune.

Among the prospects, according to The Tribune: Doug Welch.

"Swings the bat pretty good," Zimmer assessed to The Tribune.

Welch had just ended a season where he played at high-A Winston-Salem and hit .320. He went on to AA Charlotte the next season, but he never got higher. He played four seasons and never made AAA.

But his playing days did lead Welch to a new home in Winston-Salem. The Texas-native settled in North Carolina for two decades, where he served as a high school coach and teacher.

Welch's career began in 1989, taken by the Cubs in the 32nd round of the draft out of Lubbock Christian University. He also played his high school ball in Lubbock.

Welch started with the Cubs at short-season Geneva. He hit .257 over 51 games and knocked in 26.

Welch moved to Charlotte for 1991. He hit .241 there, with 13 home runs. He then split his 1992 campaign between Winston-Salem and Charlotte to end his career.

Welch then soon settled in Winston-Salem. He first worked at baseball camps, but then got a nudge from a coach to go into teaching and coaching, according to The Winston-Salem Journal.

He then signed on at R.J. Reynolds High in Winston-Salem. He stayed there for 22 seasons, including a 2014 season where his club went 22-6 and made the regional semifinals.

Welch's time in Winston-Salem ended in 2018, when he returned to Texas to be with family, The Journal wrote.

"I've been very, very fortunate with the administration over there," Welch told The Journal upon his departure. "And the kids have been amazing. I've made wonderful friends. My assistant coaches have been the best. I think I've been more blessed to have them than the other way around." 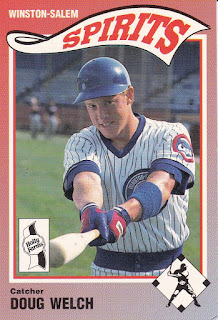