Doug Bochtler showed determination as a player, then made the majors as both a player and a coach

Once he got there, he stayed for parts of six seasons. In three of those seasons, the reliever got into no fewer than 51 games each year.

Bochtler's career began in 1989, taken by the Expos in the ninth round of the draft, out of Indian River Community College in Florida.

Bochtler started in the rookie Gulf Coast League, moving to single-A Rockford for 1990. He made AA Harrisburg in 1992. He then moved to the Rockies system, taken in the expansion draft, and landed with the Padres mid-1993 in a trade.

Bochtler played that season and the next at AAA. He then started 1995 at AAA, as well. Then, in May 1995, he debuted in the majors, in San Diego.

In an early June 1997 game, Bochtler picked up his second save of the year, with the help of Steve Finley's bat, and his glove.

"When you have a guy who can run like that in the outfield, you have to make them put the ball in play," Bochtler told The Associated Press. "That's all I did, and Finley did the rest."

Bochtler moved to the Tigers for 1998, getting into another 51 games. He finished out his career with 12 games with the Dodgers in 1999 and six with the Royals in 2000.

He didn't play his final professional game, though, until 2003, playing his final seasons in the Twins and Dodgers systems.

Bochtler has since gone on to coach. He served 2013 as pitching coach with rookie Missoula, watching over young pitchers like Cody Geyer.

"You can't watch Cody Geyer pitch," Bochtler told The Missoulian in June 2013, "and not take a look at that arm say, 'Wow, there’s some lightning coming out of that thing.'"

He returned to the majors in 2016 with the Padres, as bullpen coach. He continued in that role through 2019. 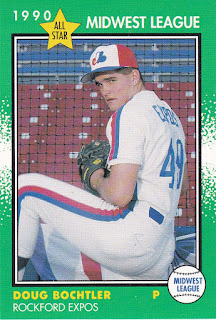