Derek Stroud's Paso Robles High team took the win over rival St. Joseph in this March 2000 game and the head coach explained to The Santa Maria Times why.

"(St. Joseph) made a couple mistakes and we were able to get some clutch hits to capitalize," Stroud told The Times.

Stroud took over Paso Robles after years earlier having been a player at Paso Robles himself. Stroud went on from playing there to play in the pros. His pro career spanned seven seasons. He made AA, but didn't make it higher.

Stroud's playing career began in 1987, taken by the Cubs in the 22nd round of the draft out of Fresno State. He also played at the College of the Sequoias and at Paso Robles.

Stroud also played the summer of 1986 in Alaska, where he went 4-1 for the Glacier Pilots.

Stroud started with the Cubs that year at rookie Wytheville. He went 3-4, with a 3.78 ERA over 19 outings, six starts.

Stroud made high-A Winston-Salem and then AA Charlotte in 1990. He saved five games between them and posted an overall 3.46 ERA.

Stroud returned for an abbreviated 1991 campaign, seeing both Winston-Salem and Charlotte again. But he got into only 10 games total and posted a 8.38 ERA. That August, he gave up a home run in his only start of the year.

Soon, though, Stroud moved on to coaching. By that September, he had a new job as an assistant coach at Furman University in South Carolina.

By 1998, he had arrived as head baseball coach at his old high school, Paso Robles. He stayed in that role through 2018, when he retired. 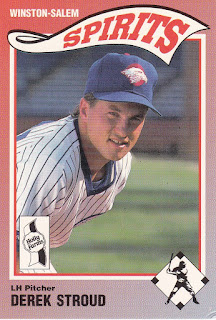