Originally published April 21, 2018
Dave Telgheder threw a AAA no-hitter in 1992 and it made national news, according to The Newport News Daily Press.

Telgheder threw it as a member of the Mets organization, whose top club in Queens had never thrown one, The Daily Press noted.

"It was a good game, but I never thought it would become that big of a deal," Telgheder told The Daily Press. "I had a lot of newspapers and reporters lining up to talk to me. It felt strange."

Telgheder had to deal with more newspapers and reporters the next year, when he made the majors. He went on to see time in six major league seasons.

Telgheder's career began in 1989, taken by the Mets in the 31st round of the draft out of the University of Massachusetts Amherst.

In June 1993, Telgheder made the majors. He went 6-2, with a 4.76 ERA over 24 outings, seven starts. He closed out the season with three-straight wins. He explained the run to The New York Times after the third win.

"I've been staying away from the middle of the plate and not giving in to hitters as much," Telgheder told The Times.

"Outstanding, what can I say?" Oakland manager Art Howe told The San Francisco Examiner afterward of Telgheder's outing. "I don't know that words can express the job he did for us."

Talgheder returned home to Middletown, NY, but stayed in the game. In 2007, he served as a high school pitching coach and instructor. 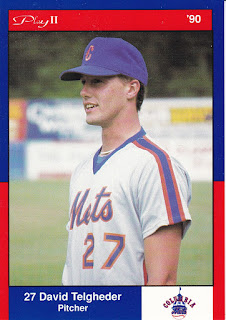