The Billings Mustangs needed a reliever and Dave McAuliffe came through in this August 1988 contest at Salt Lake City.

In that game, McAuliffe came in and shut down the Trappers for six innings, before another Billings reliever, Steve Foster, finished out the game in the 12th, according to The Deseret News.

"You've got to give credit to McAuliffe and Foster," Salt Lake manager Barry Moss told The News. "McAuliffe we haven't seen before, and he had real good stuff."

McAuliffe earned the respect of his rival manager that day and managers over the next two seasons, posting 25-save-plus seasons at Greensboro and Cedar Rapids. McAuliffe, though, couldn't impress enough to make the majors, only making AA and no higher.

McAuliffe's career began in 1988, signed by the Reds out of the University of New Haven as an undrafted free agent.

He played his first year at Billings, picking up 31.2 innings of work over 16 appearances, including that six-inning outing in August. He also got 2 saves.

Moving to single-A Greensboro for 1989, though McAuliffe took over the role as closer, saving 28 games for the club. His ERA also dipped to just 1.39 in 50 outings. McAuliffe picked up one scoreless inning in an April win over Spartanburg.

McAuliffe moved to single-A Cedar Rapids, notching 26 saves and a 1.97 ERA. He did that in 41 outings. His 26 saves served as a club record that wasn't broken for five years and otherwise hasn't been matched.

But then came 1991, and McAuliffe's move up to AA Chattanooga. The ERAs he saw before were gone. In their place was an ERA of 6.47 over 33 outings. He also picked up just three saves. It was McAuliffe's final season as a pro. 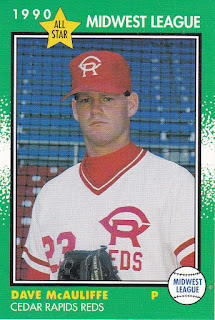