Dale Craig led off the sixth inning of this June 1990 game and the rout was on, according to The Newport News Daily Press.

Craig hit a home run to left-center and soon Craig's high-A Winston-Salem team had an 8-2 lead, The Daily Press wrote.

Craig hit that home run in his second season as a pro. He saw one more campaign. He never made AA.

Craig's career began in 1989, taken by the Cubs in the 22nd round of the draft out of Allen Hancock College in California.

Craig started with the Cubs at rookie Wytheville and at single-A Charleston. The catcher got into 13 games at each stop and hit .131 overall.

He moved to Winston-Salem for 1990. He got into 56 games there and hit .181. That home run in June marked one of two he hit on the year. Those two also marked his only home runs in the pros.

Craig returned for 1991 and played at short-season Geneva. He got into 18 games and hit .107 to end his career. 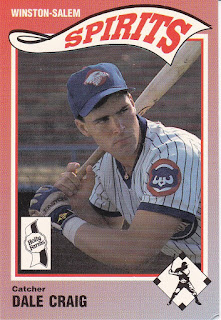