Brian Davis had a good night at high-A in May 1991; Played five pro seasons, never made AA

Originally published June 24, 2018
The St. Lucie Mets won big on this night in May 1991 and Brian Davis helped them get there, according to The Palm Beach Post.

Davis picked up two hits and three RBI for St. Lucie as they beat Sarasota by a score of 8-2, The Post wrote.

Though he had a good night, Davis' five-season career neared its end. He was released by the end of the month. He never made AA.

Davis' career began in 1987, signed by the White Sox as a free agent out of Cleveland High School in Texas.

He played at short-season Utica and at single-A South Bend in 1989. He then moved to the Mets in the minor league draft. 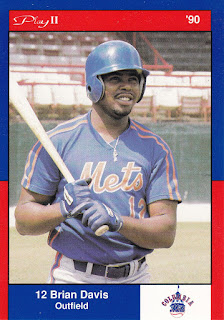