Billy Brewer hoped to show a scout what he could do; Saw seven ML seasons

When the Expos selected Billy Brewer in the 1990 draft, Brewer wasn't surprised, he told his hometown Longview News-Journal that June.

That was because of a conversation the Dallas Baptist University product had had with Expos scout Roy McMillian, Brewer told The News Journal.

"Roy talked to me and said he had seen me pitch against Texas. He said my velocity had increased over last year," Brewer told The News-Journal. "I told him I just wanted a chance to show what I can do."

Brewer soon showed what he could do and, by 1993, he was doing it in the majors. He then went on to a major league career that spanned seven seasons and the relief pitcher surpassed 45 appearances in a season three times.

Brewer also went on to play in another big league, a big mouth league, as a fisherman on the Bassmasters Tour.

Brewer's career began that year in 1990, taken by the Expos in the 28th round of the draft out of Dallas Baptist.

Brewer started with the Expos that year at short-season Jamestown. He went 2-2 over 11 outings, two starts, with a 2.93 ERA. He then moved to single-A Rockford for 1991, then high-A West Palm Beach and AA Harrisburg for 1992.

In September 1999, Brewer picked up a two-out save against the Astros, his first major league save since 1994.

"My last major league save I think was against the Yankees a long time ago," Brewer told The Associated Press afterward. "This was a good feeling because I've struggled against the Astros, they've beaten my brains out."

After his playing career ended, Brewer turned coach - and fisherman. The New York Times featured his stint with the Bassmaster in 2008. He joined the previous year after a friend got him involved.

"This sport is unforgiving, sometimes unfair, but you keep throwing, you compete," Brewer told The Times. 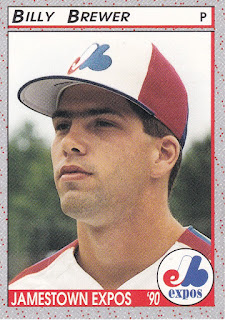