Bill Melvin kept his teams close over eight seasons; Made AAA, but not the majors

The Orlando Cubs won this June 1993 game by a run and the team's manager Tommy Jones made sure to credit his relievers, including Bill Melvin, according to The Orlando Sentinel.

Between the three hurlers, they allowed only one hit over four innings and kept the team close, The Sentinel wrote.

"If Melvin, (Earnie) Johnson and (Aaron) Taylor don't come through in the middle innings, we don't win," Jones told The Sentinel.

Melvin came through in the pros over eight seasons. He made AAA in one of those campaigns, but he never could come through enough to make the majors.

Melvin's career began in 1986, taken by the Cubs in the eighth round of the draft out of Louisburg College in North Carolina.

Melvin had a 3.33 ERA in 41 mostly relief outings there in 1991. He got out of two games in an April outing, including a bases loaded one. He then worked out of an August jam that year with a strikeout and a ground out. 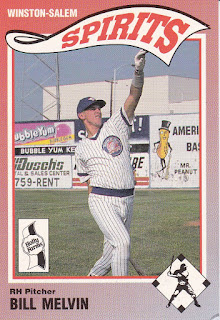