A mid-year injury left Maine high school baseball standout Ben Wessel unable to pitch, but he could still hit and he returned to help his team, according to The Bangor Daily News in 2012.

"That's just a credit to him and who he is as a person and how he's matured over the years," Wessel's coach Mike Coutts told The Daily News.

The young Wessel, who went on to play at the University of Rhode Island, had some baseball experience from which to draw in high school, and later college. His father, Troy Wessel also played baseball, and made the pros.

Troy Wessel's career began in 1988, signed by the Expos as a free agent out of Plymouth State University in New Hampshire.

Wessel's career began that year in 1988 as a pitcher in the rookie Gulf Coast League. He got into seven games, all in relief. He picked up one loss and gave up nine earned runs in nine innings pitched.

Wessel's last playing time came in 1990, back at Jamestown. He got into three games in relief and gave up six earned in three total innings to end his career. 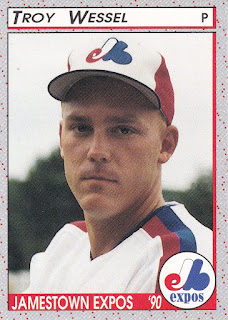