Robbie Katzaroff knew all he could do was play hard; He played seven seasons, never made bigs

Robbie Katzaroff made AAA for the first time in 1993, with the Giants. To move up further, though, he knew he needed people on his side, someone to like his game and tell others, he told The Los Angeles Times in 1994.

He also knew he just needed to continue to do what he did, he told The Times.

"I have to play hard every day and play my game," Katzaroff told The Times. "I enjoy the game of baseball and I enjoy playing well. The politics of moving up is out of my control."

Katzaroff went on to see AAA again, but not until 1996, and then only briefly. In a career that spanned seven seasons, Katzaroff never got the chance to move up to the majors.

Katzaroff's career began in 1990, taken by the Expos in the 14th round of the draft out of UCLA. Katzaroff went to UCLA out of Los Alamitos High. Katzaroff was also credited as Robert Katzaroff. and Rob Katzaroff.

Katzaroff chose UCLA after recording a county-record 51 hits his junior season, including a 27-game hitting streak. He hit .520 that junior year. He picked up another 39 hits his senior year.

Katzaroff also played football in high school, wide receiver. His quarterback? Future major leaguer J.T. Snow. In one October 1985 game, the two combined for four touchdowns in the first-half alone, according to The Times.

"When you have good players you have to give them the ball," John Barnes, Los Alamitos coach, told The Times then of Katzaroff and Snow. "They’re just good athletes who can make things happen."

At UCLA, Katzaroff served as team captain in 1990. He scored 192 runs over his career there, still good for seventh best all-time. He also had 284 hits, good for fourth all-time.

Katzaroff started with the Expos at short-season Jamestown. He hit .364 in 74 games. He also stole 34 bases. He knocked in a run on a single in a July game.

He then arrived in the Giants system for 1993. He played mostly at AA Shreveport, but also got a nine-game look at AAA Phoenix.

Katzaroff played 1994 in the Angels system, and took a step back. He played the year largely at high-A Lake Elsinore and got 32 games at AA Midland.

He then played 1995 at AA Portland with the Marlins and saw 32 games in 1996 with the Yankees, including two more games at AAA, in Columbus. That 1996 campaign proved his last in pro ball. 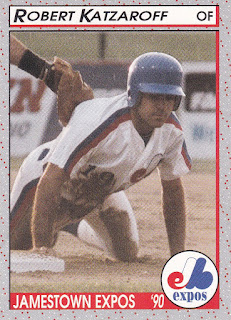