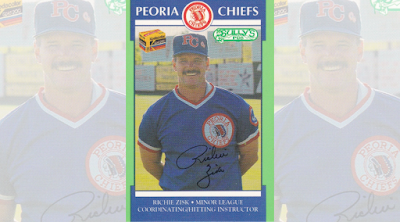 Richie Zisk played 17 seasons as a pro, but he knew he wanted to coach. He wanted to work with young players, Zisk told The Daytona Beach News-Journal years later.

He wanted to be the kind of influence he didn't get when he was in the minors, he told The News-Journal.

"When I came up through the minor leagues, there was not a whole lot of instruction. I had to watch, listen and observe," Zisk told the paper.

Zisk listened and observed enough to break through to the bigs, then stick around for more than a decade. He first made the bigs in 1971 and didn't play his last game there until 1983.

He then went on to a long career in the minors as a coach and manager, helping young hitters in the Cubs organization improve their game and make the majors themselves.

Zisk's career in baseball began in 1967, taken by the Pirates in the third round of the draft out of Parsippany High School in New Jersey.

Zisk started with the Pirates at rookie Salem. He made AA Waterbury in 1970 and AAA Charleston in 1971. Then, in September 1971, he made Pittsburgh.

Zisk then hit .313 over 149 games in 1974, with 17 home runs. He continued with the Pirates through 1976, when he was traded to the White Sox in a four-player deal that included Rich Gossage being sent to the Pirates.

He played one season in Chicago, but that season also marked his first of two all-star appearances. He hit .290, with a career-high 30 home runs. Zisk then signed with the Rangers for 1978 and made his second all-star appearance.

Zisk signed with the Rangers for just under $3 million, The New York Times wrote. On Opening Day 1978, Zisk then hit a game-winning home run against the Yankees, and off new Yankee Gossage.

"Personally, It was very gratifying for me," Zisk told The Times of his performance in his first Rangers game. "A lot is expected of me. When I first came over here, I didn't know what kind of reception I'd get because of all the money. But the guys have been great. There have been no hard feelings and they've accepted me."

After three seasons with Texas, Zisk moved on to Seattle. He started the season strong and he credited his hitting coach, Tommy Davis, according to Sports Illustrated.

"I'm not quite ready to put him on a pedestal yet," Zisk told SI, "but when he talks, hitting people should listen."

Zisk continued with the Mariners through 1983. He then turned coach himself.

By 1995, he arrived in high-A Daytona, with the Daytona Cubs. He didn't leave Daytona until 2010. He served much of that time as hitting coach. 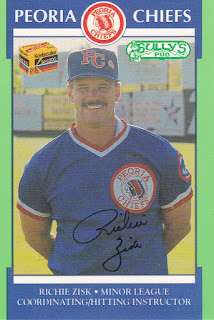