Reid Hartmann's dad left coaching at one school to coach his son; The son made the pros over three seasons

Reid Hartmann's dad Frank coached for one school, but he decided to leave, The St. Louis Post-Dispatch wrote.

His reason: His baseball playing son, The Post-Dispatch wrote.

"I really liked it (coaching) but I wanted to see my son play," Hartmann told The Post-Dispatch, after he eventually took a job coaching his son. "I figured it was one or the other."

The elder Hartmann eventually got to see his son play at higher levels. Reid Hartmann went on to play in college and in the pros. His pro career lasted three seasons. He never made the majors.

Hartmann's pro career began in 1988, taken by the Mets in the 41st round of the draft out of St. Louis Community College-Meramec. He played his high school at Mehlville High in St. Louis.

At Meramec, Hartman went 3 for 4 in a March 1987 game. He also knocked the game-winner. He hit .396 that year, then lost most of the next with a injured thumb.

Hartmann played 1989 at rookie Kingsport. He scored in a July game. He got into 66 games overall and hit .295.

He then played 1990 between single-A Columbia, high-A St. Lucie and AA Jackson. He saw Jackson for eight games and knocked a double in one contest. He hit a bases-loaded single at St. Lucie. He hit .218 in 78 games between the three levels to end his career. 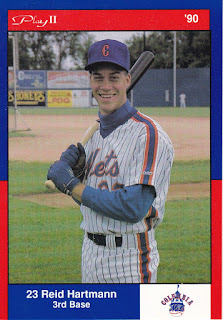