Things had gotten chippy in this May 1989 San Diego State-BYU game and BYU's Randy Wilstead tried to end it all with his bat, according to The Deseret News.

Wilstead did so by knocking the game-winning home run - and then leaning on his bat to watch it go before starting to run, The News wrote.

"I hope so," Wilstead told The News afterward . They were throwing elbows all day long after grounding out. I knew if I hit one out, I'd let him (the pitcher) know I hit it."

Wilstead went on to turn pro the next year and hit some home runs in the pros. He played in six seasons, briefly made AAA, but later recounted how he saw the 1994 strike as prematurely ending his career and bid for the bigs.

Wilstead's career started in 1990, taken by the Expos in the 16th round of the draft out of BYU. Wilstead was also credited by his given name, Randon Wilstead.

Wilstead earned multiple honors at BYU, including all-conference and All-American. He won conference and national player of the week honors in early April for work against Hawaii.

With the Expos, Wilstead started at short-season Jamestown. He hit .272 over 56 games. He also hit four home runs and knocked in 21.

Wilstead also saw high-A West Palm Beach for one game in 1991. He then returned there for all of 1992 and recorded a .285 average.

That July in 1994, he even got word that he was being considered for a September slot with the big club, he told The St. George Spectrum. Then the strike happened and the next spring, he refused to be a replacement player.

When he refused, he quoted an Expos official telling him he'd "rot in A-ball," he told The Spectrum. He played six games at AAA Ottawa that year,  had surgery and then was offered an A-ball assignment. "The strike put me out of the game — bottom line," Wilstead told The Spectrum. 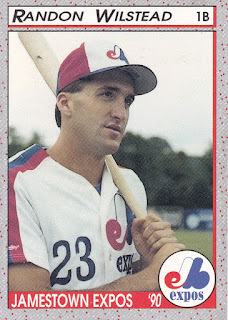