Rafael Diaz returned from Mexico with a new chance in 1997; Played as a pro a long time, never made bigs 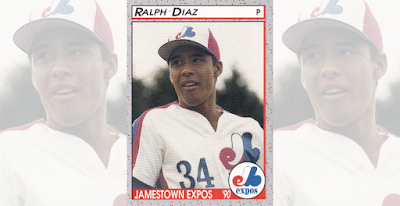 After spending a season in Mexico and pitching well, Rafael Diaz moved back stateside for spring 1997 and a new chance with the White Sox, according to one account.

The account included the hopeful prediction that, after going 15-1 the previous year, Diaz could challenge for the club's fifth starting spot.

Diaz, though, never made the White Sox that year and, in a career that spanned at least 15 seasons, he never made the majors. Diaz topped out at AAA. He also got a brief look at Japan and a long stint in Mexico.

Diaz' career began in 1999, signed by the Expos out of California. He's listed as a native of Quades, Mexico, but his card lists him as having played at Bell High School in California and Cerritos College claims him as an alum.

Diaz started with the Expos in the rookie Gulf Coast League. He went 2-8, with a 3.67 ERA there. He then moved to short-season Jamestown for 1990. He picked up his third save of the year in late-June, then threw a three-inning save in mid-July.

He arrived at high-A West Palm Beach for 1992 and got a one-game look at AAA Indianapolis. He made Harrisburg for all of  1993 and much of 1994. In a June 1994 game, he retired the first nine batters he faced, but then gave up a home run and his team took the loss.

Diaz returned to Monterrey for 2001 and moved to Saltillo for 2003. According to Baseball-Reference's Bullpen, Diaz continued pitching in Mexico through 2009. 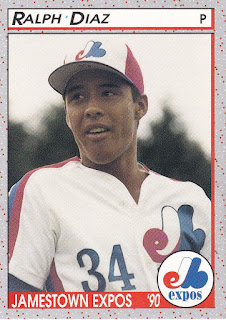