Q.V. Lowe still loved the game after nearly 50 years in it; Coached in college, minors and bigs

Q.V. Lowe looked back on his long career in 2014 and felt satisfied, according to The Montgomery Advertiser.

Lowe spoke on the occasion of his retirement as manager at Auburn University at Montgomery, a position he'd held since 1987. Along the way, he managed several summers in the Expos system and even started as a player himself in the minors.

"I've been coaching 45, 48 years. I still love the game and especially love the kids I have out here," Lowe told The Advertiser that May. "I just think it's time to move on. I think I deserve to be able go fishing or sit back and watch a game without worrying about winning and losing."

An Alabama native, his home state sports community honored him in late-2019 with the announcement that he would be inducted into the Alabama Sports Hall of Fame.

Lowe's long career in baseball began as a player in 1967, taken by the Cubs in the 19th round of the draft out of Auburn University. Lowe is also credited as QV Lowe.

Lowe's playing career lasted five seasons. He started at single-A Lodi, then made AA San Antonio in 1968. He stayed at San Antonio for four seasons, through 1971 and the end of his playing days.

Lowe then jumped into coaching - in Chicago. Lowe served as Cubs bullpen coach in 1972, before moving to the minors.

Lowe then joined the Expos system in 1986 as pitching coach at AA Jacksonville. In 1987, he added Auburn University at Montgomery to his plate.

With the Expos, Lowe served as a minor league coach through at least 1992, when he took over as manager at short-season Jamestown.

Author George Gmelch visited Lowe in 1991 and 1992 for Gmelch's book "In the Ballpark: The Working Lives of Baseball People." Lowe served as Jamestown's pitching coach in 1991 and in previous seasons.

Lowe spoke to Gmelch about his childhood in Florida, start in baseball and run through the minors and year in the majors as a coach.

Gmelch also described the man he interviewed as having "the look of a marine drill sergeant - close-cropped hair, thick chest and arms, conservative dress, and a no-nonsense manner - which belie the open-minded, sensitive, and thinking man that he is."

At Auburn University at Montgomery, Lowe quickly built a baseball team - from nothing. He headed up the school's first team. He even helped build their field.

Early on in his tenure, in 1990, one of Lowe's players, Dandy Smith, described the start and Lowe's influence in comments to The Lewiston Tribune.

''It was hard that first year. We only won seven games,'' Smith told The Tribune then. ''But I felt like we were going to get better. Coach Lowe didn't really say anything to us about it, but his actions told us.''

Lowe's formal induction into the Alabama Sports Hall of Fame is set for May 2020. 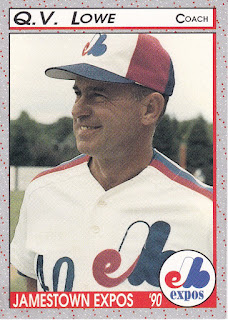